We have made good progress in our Sunday sessions over the last few weeks.

I have resurrected my decades old physics engine. See these videos. (1 , 2, 3)

I have been comparing various game development frameworks, at this point MonoGame is looking like the platform of choice. I have working code on PC, Mac, iOS and Android. Path looks clear for XBox-360 and possibly even the  PS3, Wii and Vita based on the gossip on the internets.

I want everything (within reason) in the game to be a plugin. I have managed to build a plugin engine and get downloadable plugins in MonoGame working on PC, Mac and iOS. I’ve modeled this on the way that Minecraft starts up and downloads content and updates. I want users to download a single small executable that can then pull everything down it needs and patch itself transparently.  Unlike Minecraft I want plugins to be officially supported and available in an Eclipse/apt/Drupal/Pear style system of official and unofficial plugin repositories, or even just downloading from a URL.

Plugins for Android seems to be giving me trouble but at this point I’m not aiming for plugins to work completely on Phones and tablets. Working plugins under iOS is a cool win but I need to carefully re-read the Apple Store policy on downloadable code. I know they are particular about some scenarios and I have a hunch what I want to do may be frowned upon.

We have started the story-boarding and design of the game. Mr10 just loves the creative imagination and play that comes with this phase of defining not just the game, but the universe and back-story. 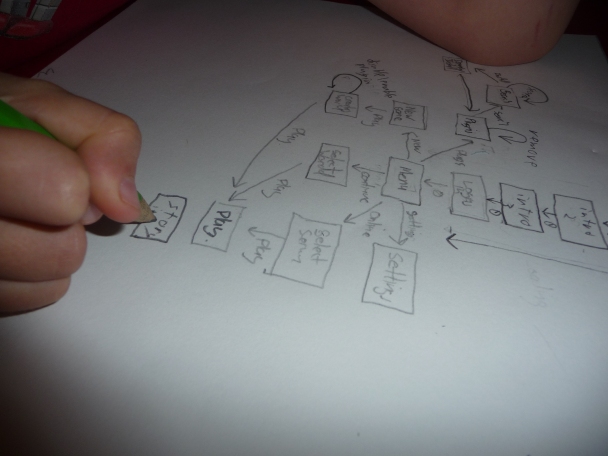 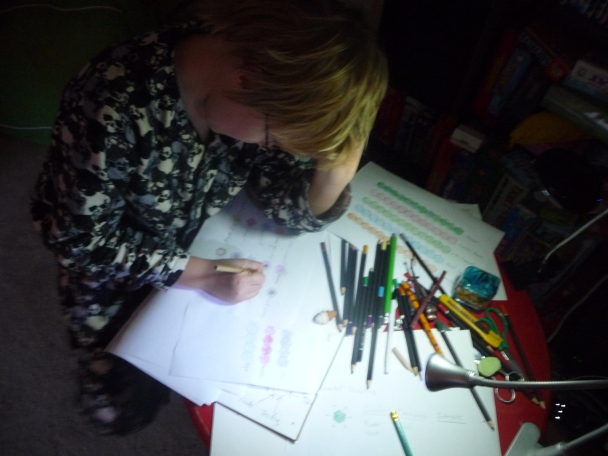 I have a plugin and download manager developed and I have the intro/logo screens running as plugins. See this video.

I’m easing myself into MonoGame learning all the basics with the intro screens before I dive into porting my engine from C++/GL, to MonoGame/XNA

Mr10 has been putting his Photoshop skills to work. He has actually had lessons in the most recent CS Photoshop and plays with it for so he is full of good advice and knows how to use it better than I do. 🙂

Here he is with a near final version of our ‘company’ logo for the game,

Next step is to map out the scenarios on how we can construct things in the game.

We have made some hex tokens we can use to try out some paper prototype scenarios.

I’m working on a template for each of the blocks that will explain how they work and more importantly the rules for the cellular automata that will define how they interact together.

Over the next few Sunday afternoons we should have a firmer idea as to most enjoyable and intuitive way for people to be able to construct ships and mines.

1 Response to The Game – Progress Report #1