I’m trawling through conventional theory at the moment to see if my approach shows up on the radar anywhere – if it does then I can probably get some hints and tips on what could make it better or if I am doing something wrong.

This is the second of three posts.

Conventional wisdom is that you perform the following steps.

Step 1) Write Down The Regular Language

For a Given Regular language, Building the NFA is generally done using Thompson’s construction.

eg. for ( a | b )* abb you would produce the following expression tree… 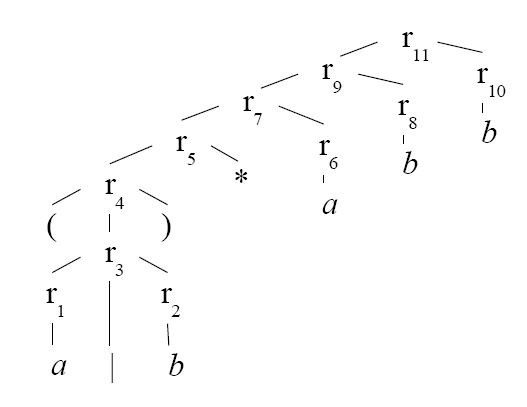 a) For e (no input) construct the following pattern

b) For a single character, ‘a’ construct the following pattern.

Now we get into the rules for compositing TFA’s together with the various logical operations.

c) For constructing a composite NFA from two pre-existing NFAs s and t in the form of (s | t) .  Let NFA(s) and NFA(t) be the NFAs for regular expressions s and t. Construct the following pattern. 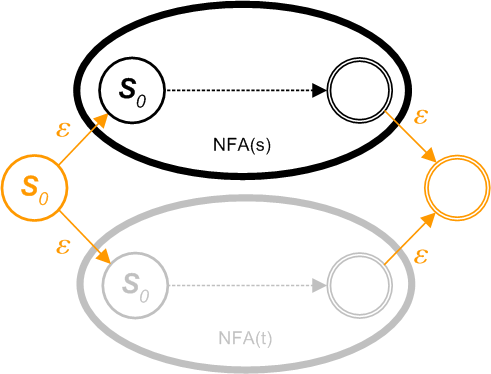 d) For constructing a composite NFA from two pre-existing NFAs s and t in the form of st .  Let NFA(s) and NFA(t) be the NFAs for regular expressions s and t. Construct the following pattern.

e) For constructing an NFA in the patten of a Kleene Star (a sequence of zero or more elements) from an existing NFAs s in the form of s* .  Let NFA(s) be the NFA for the regular expressions s. Construct the following pattern. 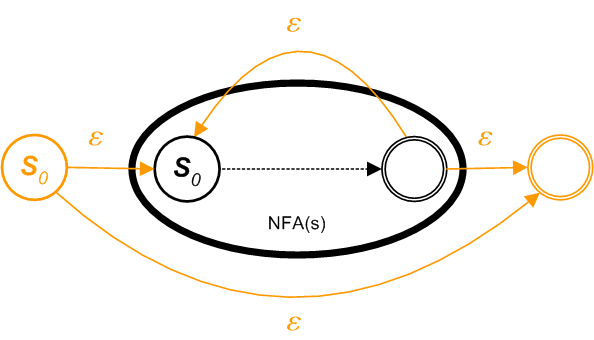 f) For constructing an NFA in the patten of a Kleene Cross (a sequence of at least one element) from an existing NFAs s in the form of s+ .  Let NFA(s) be the NFA for the regular expressions s. Construct the following pattern.

g) For constructing an NFA in the patten of an option (zero or one element) from an existing NFAs s in the form of s? .  Let NFA(s) be the NFA for the regular expressions s. Construct the following pattern.

However the following is what you get if a human designs it. 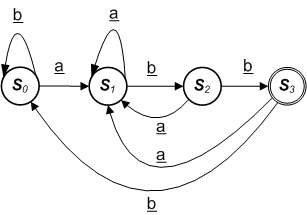 However the following is what you get if a human designs it.

But its good to know we can automate the generation – even if the result is not optimal.

Step 3) Convert the NFA into a DFA (Determinisation)

If it is possible to have multiple transitions based on the same symbol, then we can regard a transition on a symbol as moving from a state to a set of states (ie. the union of all those states reachable by a transition on the current symbol). Thus these states will be combined into a single DFA state.

Ni is a state from the source NFA

? is a finite set of symbols, that we will call the alphabet of the language the automaton accepts

Start state derived from S0 of the NFA
Take e-closure(S0)
Take the image of S0, Move(S0, ?) for each ? ? S, and take its e-closure
Iterate until no more states are added

Output is a set of states S and a set of transitions T.

Worst case is an exponential increase in the number of states and transitions.

The fastest (O(|Q|log|Q|), where |Q| is the number of states) minimization algorithm (by John E. Hopcroft) is described in:

John E. Hopcroft, An n log n algorithm for minimizing the states in a finite automaton, in The Theory of Machines and Computations, Z. Kohavi (ed.), pp. 189-196, Academic Press, 1971.[bibtex]

The third item on the list (i.e. the book) is probably the easiest to find, but beware that the description is somewhat hidden. Look for “partitioning”. The problem of minimizing states in the set of states of an automaton is equivalent to finding the coarsest partition of the set of states, consistent with the initial partition into final and non-final states, such that if states s and t are in one block of the partition, then states delta(s, a) and delta(t, a) are also in one block of the partition for each input symbol a.

An algorithm that is considered by some people to be equally fast for frequently encountered data is Brzozowski’s algorithm. It minimizes an automaton by performing reversal and determinization twice. The subset construction (determinization) is O(2|Q|), where Q is a set of states, but it depends on input (see master thesis by Ted Leslie in the Determinization section). The second paper here describes complexity of operations needed to implement Brzozowski’s algorithm.

The following algorithm is different from all others because partial results can be used. It tests pairs of states for equivalence. The first paper describes a version with exponential time complexity. The second paper adds modifications that make it almost O(|Q|2).

The Hopcroft-Ullman is one of the best known. Its complexity is O(|Q|2), and it also requires O(|Q|2) memory, so it does not seem to be suitable for large automata. Pairs of states are considered, and the automaton has to be complete (i.e. it must have a sink, or dead state). A pair of states is distinguished if one of the states in the pair is final, and the other non-final. A pair of states is also distinguished if transitions labeled with the same symbol lead to another pair of states that was found distinguishable. For each pair of states, a list of pairs is found that are targets of transitions. Initially, pairs containing one final, and one non-final state are marked as distinguishable. Then all pairs that are on lists associated with those pairs are marked, and so on until no new pairs are marked. Pairs that are not marked are equivalent.

For acyclic automata, there are better methods than those given above. The minimization part of incremental and semi-incremental construction algorithms can be used.